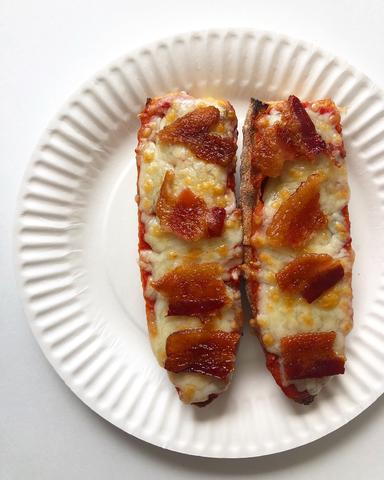 We asked Brightland pal Karen Palmer to create a special recipe for us using Brightland's newest flavor, ARDOR. Karen Palmer is a Los Angeles-based food writer whose work has appeared in such publications as Food & Wine, Travel + Leisure, Los Angeles Magazine, and many others. In 2018, she launched Pain Pizza, a pop-up that takes the French bread pizza we all loved to pop in the microwave as kids and makes it better using quality ingredients, such as locally made Bub & Grandma’s baguettes and California-grown Bianco DiNapoli tomatoes. Pain Pizza has sold out at pop-ups at restaurants and bars across L.A. Read on for our Q & A with Karen and her incredible Amatriciana-ish Sauce, featuring ARDOR! What do you like to keep out on your kitchen countertop or "kitchen shelfie"?

My kitchen is pretty minimalistic, but I like that it’s uncluttered. After years of living in teeny-tiny New York City apartments with even teeny-tinier kitchens, it feels so nice to have space! As for what’s on the countertop, there’s a wooden bowl that’s always stocked with lemons and garlic, a fancy-ish coffee grinder (because my boyfriend is a coffee nerd), a marble salt cellar filled with kosher salt, a peppermill, a couple of cutting boards, a cheese board, a small selection of cookbooks, and my tangerine KitchenAid mixer. Truth be told, I don’t use the mixer very often, but it has a nostalgia factor for me—and I love the way it looks.

What does living in a golden state meant to you?

Living in a golden state means taking the time to appreciate and be grateful for the little things. For me, that means being lucky enough to live in Los Angeles, where it’s warm and sunny most of the time, and I can see palm trees out my bedroom window.

If you could host a dinner party at home and invite 3 guests, who would they be, what would you serve and what music would play in the background?

I’m going to go with three iconic women who would spark incredible conversations: Oprah (because, duh, who wouldn’t want to have Oprah at their dinner table?), Julia Child (because I’d love to hear what she thought about the food world today) and the late Carrie Fisher (because I’m an unabashed Star Wars nerd, and man, what a storyteller!). I’d be too scared to serve French food, so I’d probably make a big bowl of pasta, open a bottle of red wine, put on some Queen (because it’s what I’m listening to at the moment) and see where the night takes us!

What was your favorite board game as a child?

I don’t know if it counts as a board game, but I’m going to go with Hungry Hungry Hippos because I feel like it foreshadowed my adult life. Even when I’m eating a meal, I’m always thinking about what I’m going to eat NEXT.

What was your favorite thing that your mom/dad/grandparent cooked for you when you were little?

My grandmother made big batches of homemade ricotta gnocchi, and she’d freeze a bunch of them to have them on-hand for an impromptu dinner. I used to stop by on my drive to and from college, and she’d pull them out of the freezer and cook them for me as a “snack.” My mom asked her to write down the recipe before, and we’ve tried to recreate it, but we’ve never quite nailed it. She cooked by touch and feel, and like many Italian-American grandmothers, her method was more a “handful of” this or a “pinch of” that, rather than using exact measurements. I miss her—and her gnocchi!

This recipe isn’t a “traditional” Amatriciana, which would probably use pancetta or guanciale. The light smokiness here is from good, old-fashioned bacon. And unlike some classic Amatrcianas, I added onion for a sweet counterpoint to ARDOR’s warmth and heat. If you’d like to make a vegetarian version, simply omit the bacon and increase the amount of ARDOR slightly. It works well as a sauce for French bread pizza, or as an accompaniment for your favorite pasta shape.

While the sauce is reducing, set your broiler to high. Toast the baguette slices until they get a little bit of color, 2 to 3 minutes.

Season the sauce with salt and pepper to taste, adding a finishing drizzle of ARDOR if you’d like more heat.

Make the French bread pizzas: Slather some sauce onto each baguette slice, then top generously with mozzarella cheese. Place the slices on a sheet pan and put them under the broiler until the cheese melts and starts to brown, 3 minutes or so. Let cool slightly, crumble the additional bacon on top and enjoy!